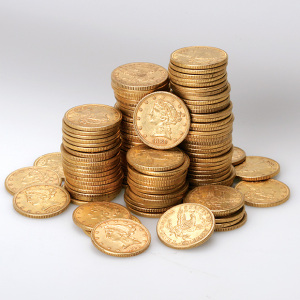 Liberty Head Gold Coins – The only coin type to be struck by every mint!

Amidst all of the crowds and craziness surrounding the U.S. Mint’s release of the new Kennedy gold coin at this year’s World’s Fair of Money in Chicago, we were lucky enough to have our own gold coin success story. In search of classic collector coins, we were surprised to come across a stunning group of late 1800s and early 1900s $5 Liberty Head gold coins! In addition to being beautiful coins to look at, they have a fascinating story. The $5 Liberty Head gold coin is the only coin to have been struck by all seven different mints that were in operation at the time – Philadelphia, Denver, San Francisco, New Orleans, Carson City, Charlotte and Dahlonega.

The World’s Fair of Money is a large show, and it was extremely busy for us. We spent long days at our table combing through hundreds of dealers’ inventories to purchase the best coins for our customers. When we came across a group of beautiful $5 Liberty Head gold coins, we did a double take. Being able to find groups of these coins that haven’t been cleaned or altered in some way is becoming more and more difficult every day.

Holding these coins is exciting because it takes you back to the early 1900s when these coins circulated and traded hands every day until 1934 when gold was made illegal to own. The Depression had caused many people to hoard their gold, which in turn was thought to be making the Depression worse. Many of the coins that were returned to the government were used to pay foreign debt. Fortunately for us, we purchased a group that had been sitting in foreign bank vaults for decades. With a perfect color and look, these Extra Fine and About Uncirculated coins look just as they did when they circulated! 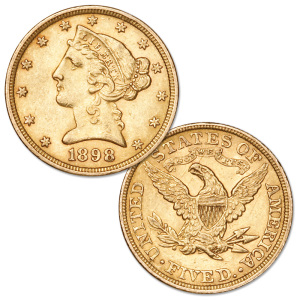 The $5 Liberty Head series ran from 1839‑1908. All coins before 1866 are referred to as “No Motto” because they lack the motto “in god we trust” which was added to the reverse in 1866. The coins that we purchased are of the later “With Motto” variety. All in all, we purchased over 80 pieces to offer to our collectors.

In addition to purchasing these great gold coins, we were able to find many higher grade and key–date coins of all types, plus some good pieces of collectible currency. Keep your eyes on upcoming Showcase Catalogs for offers featuring these exciting items.

Overall, the World’s Fair of Money was a great success. In a few weeks, we’ll be back on the road again. Stay tuned for more notes from the road.