Have you heard of Challenge Coins recently? If the answer is yes, allow me to say… I’m not surprised! They’re a fast-growing area of the numismatic hobby, and have risen up as a very popular way to honor anyone in a position of service.

First: the history behind Challenge Coins

If you’re not sure what a Challenge Coin is, no worries – I’ll bring you up to speed. Their origins have been widely debated. Some say they date back to the earliest days of service in the United States military. Still others say they can be dated back to the Roman Empire!

One popular story tale about the origins of Challenge Coins dates back to World War I. According to lore, a military officer gave bronze medallions to members of his flying squadron – each one featuring the squadron’s insignia. During a mission in Europe, one soldier was shot down and captured over Germany, and held as a prisoner of war. When he finally managed to escape his captors, it was without any form of identification – he had only the clothing on his back, and a small leather pouch that carried his squadron coin.

When the pilot made his way to France, he was captured under the suspicion that he was a spy. Without any way to officially identify himself, the pilot relied on his last hope – the medallion with his flying squadron insignia emblazed upon it. Thanks to this bit of good fortune, he was able to return to his unit, and he held fast to the belief that his “Challenge Coin” saved his life! 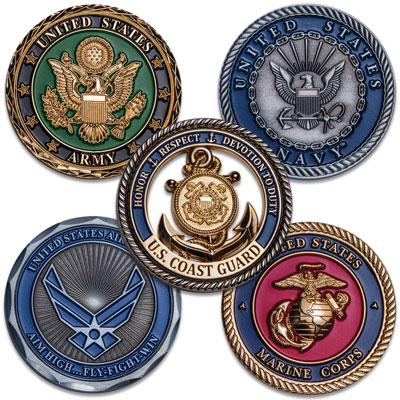 Regardless as to how far back in time this tradition is said to go, these pieces are always held in high regard by members of the military. They’re given to service members as a way to boost morale and show appreciation. In addition, Challenge Coins are handed out to those who served as part of a military operation. Service members also enjoy trading these pieces as a show of camaraderie, or leaving them as a token of remembrance.

And that’s where our Challenge Coin exploration begins – with pieces honoring five branches of the U.S. Military! Individually honoring the Army, Navy, Air Force, Marines and Coast Guard, these colorful brass coins are fitting tributes to those who have served.

A fit for any collector 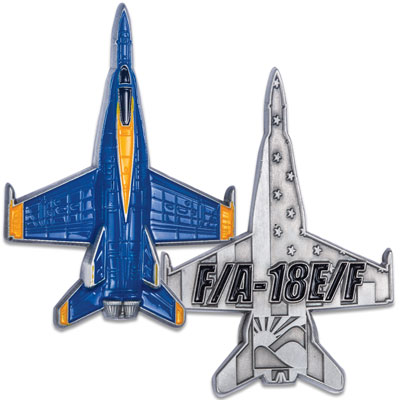 Though they can come in all different shapes and sizes, most Challenge Coins range from 1½” to 2″ in diameter. In a fun twist that utilizes modern coinage technology, more recent Challenge Coins have sported unique shapes, too! An impressive example is this brilliantly colorized 3D Challenge Coin, shaped like an F/A-18E/F Super Hornet.

One of the best Challenge Coin themes I’ve seen recently are those pieces honoring the frontline workers who emerged as heroes over the past couple of years. First Responders, Healthcare Workers, Educators and Essential Personnel have gone above and beyond – and the Challenge Coins celebrating their efforts make a fantastic way to say “thank you”!

An affordable way to own rare U.S. coin designs 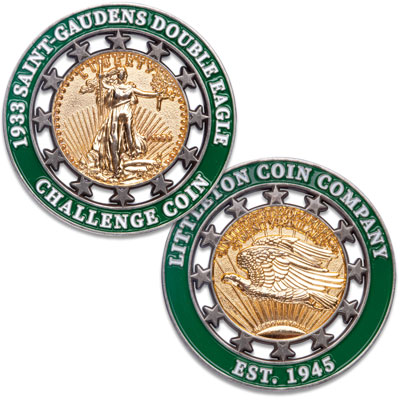 In the collecting world, there are some pieces that collectors can only dream of owning. The 1933 $20 gold piece, designed by Augustus Saint-Gaudens. The 1893-S Morgan dollar. The 1787 Brasher Doubloon. And, of course, the 1804 Draped Bust silver dollar. Heavy hitters for sure – owning just one of these pieces would be a near impossibility! But thanks to a series of Littleton Exclusive Challenge Coins, you can bring home each of these elusive designs.

Of course, if you’re collecting these unique pieces, you’ll also want an equally distinctive way to organize them! Here at Littleton, we recommend this patriotic Challenge Coin Album.

Have you ever received a Challenge Coin, or given one to someone? If so, I’d love to hear your tale behind it, below!