Remember when we took a deep dive into restrikes? We traveled the colorful trail of Confederate dies that went underground in Philadelphia at the start of the Civil War. When they surfaced decades later, they were used to restrike the design on different metals… until they broke, making those restrikes highly sought after by collectors. 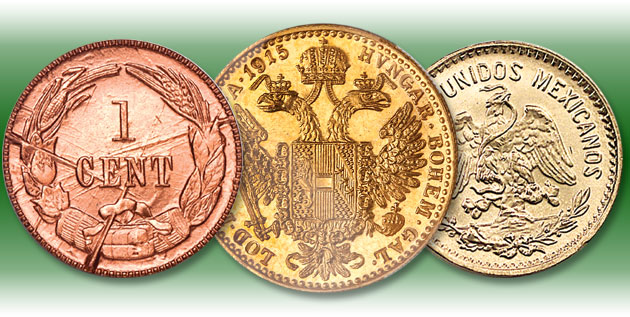 In doing that historical spelunking, we discovered several world coins that are restrikes. Collectors love them for different reasons. Let’s take a look at three of the most popular foreign restrikes.

From Austria to Arabia

Without a doubt, the longest running foreign restrike in history is the Maria Theresa Thaler. Austria began the restrikes in 1857, using the last profile of her to appear on a thaler the year she died – 1780. That date and her profile complete with a circular pearl brooch appeared on coins struck on 83.3% pure silver through WWII.

It was slightly larger in diameter than an Eisenhower dollar. The coin honored the Empress of the Holy Roman Empire, the Queen of Habsburg and Bohemia – plus three other very long royal titles. Each was succinctly abbreviated as lettering inside the obverse and reverse rims. 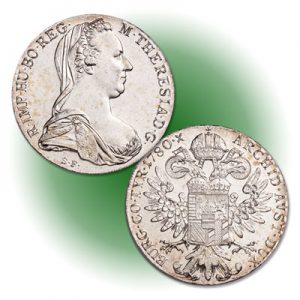 Her 18th century contemporaries were Catherine the Great of Russia and Madame de Pompadour of France, an influential member of King Louis XV’s court in France. The empress championed scientific and medical research, and instituted numerous social-reform programs. She also gave birth to 16 children, one of whom, Marie Antoinette, married Louis XVI.

The Austrian thaler that honors the empress lasted longer than her royal descendants. It became a world trade coin. The stable silver restrike evolved as the preferred exchange for commerce throughout Arabia and Africa. Maria Theresa’s realistic profile and the well-balanced design contributed to its enduring appeal to collectors. Even today, it can be found woven into tribal jewelry and used as a dowry – in quantity, of course! In some cultures, it’s seen as having magical properties.

As foreign restrikes go, it is the most affordable of the three we’re looking at.

From Arabia to the Americas

How cool would it be to tour the mint-turned-museum in Mexico City. Established by a decree from the Spanish crown in 1535, La Casa de Moneda de México is the oldest mint in North and South America. It once struck coins that helped finance the American Revolution!

But it was WWII that set the stage for a gold 2 pesos coin design that’s a collectible restrike. The reverse features the Mexican coat of arms. The national bird, a golden eagle, is perched on the country’s most versatile fruit – a prickly pear cactus. In its beak, the eagle wrangles a snake. A branch of oak leaves lies beneath the cactus.

For some, the images represent Mexico’s liberation from Spain in 1810. On a sacred level, others revere the homage paid to the Mexica Tribe of Aztlan: the golden eagle symbolizes freedom; the cactus, the universe; the oak branch, strength, and the serpent, knowledge. 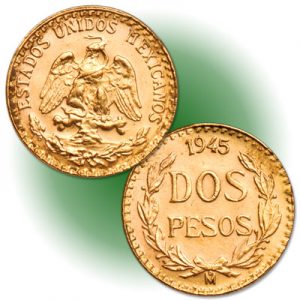 During WWII, the words “dos pesos” for the denomination replaced the profile of Don Miguel Hidalgo, a hero of the Mexican War of Independence, on the obverse. A laurel wreath, symbolizing victory, framed the words. The mint mark, “M,” was located just below the wreath. The year 1945 was placed at the top.

From Golden Eagles to French Roosters

Leave it to the French for a bit of word play associated with their beloved emblem, the rooster. In Roman times, France was known as Gaul; in Latin, Gallia. Also, in Ancient France, the Latin word for rooster was gallus. Linking the two together, many Gauls used a rooster to symbolize their loyalty.

By the time of the 1830 French Revolution, the rooster was appearing on banners and flags associated with the triumphant creation of the Second Republic. The bird with the gorgeous iridescent plumage returned as a symbol during the Third Republic of 1870-1940. It was during that time the fearless fowl, also known for its vigilance, made its way onto French coinage.

The first strikes occurred from 1899 to 1914, showing the rooster on the reverse of the 20 Franc gold coin. Designed by Jules-Clement Chaplain, the inside rim lettering said dieu protege la france (God protects France). 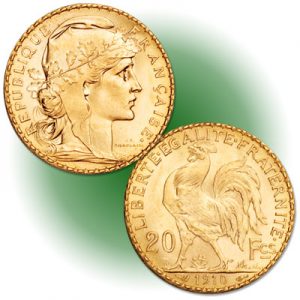 Then, in 1921 and again from 1951 to 1960, the restrikes of the 20 Franc coin in 90% pure gold were issued, using the years of 1907 to 1914. But this time, the inside rim lettering proclaimed: liberte, egalite, fraternite (Liberty, Equality, Fraternity). At 21 mm in diameter, it’s slightly smaller than a Washington quarter.

Adding to the gold coin’s cultural value is the Gallic rooster’s symbolism during WWI when it became an insignia of the resistance. Check out this gleaming, high-value restrike gold franc here.

Whether you’re a connoisseur of precious metal, a history enthusiast, or a collector of coinage art, the pursuit of foreign restrikes can provide a satisfying opportunity to assemble a prize-worthy collection.